Places of interest in the surroundings

This mansion of the renowned landlords of the town, the Festetics family, dates back to the 18. century and is one of the 3 greatest and finest barock palaces in Hungary. In its museum visitors can obtain information how the nobles once lived in Hungary, they can see the ornamented firearms of the different centuries and the Windischgrätz trophy exhibition is also worth visiting. In the coach house and in the riding hall you find the only Coach Museum of Hungary. In the building exclusive concerts, master courses are held for classical music enthusiasts. The English park of 7.2 hectares is graced by plant rarities. 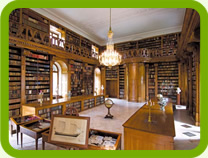 The museum displays the agriculture of a manor, and the former life of the agricultural labourers. One can observe the various agricultural machines and devices, the smithery and the cartwright's workshop. The museum also provides information on wine-growing and viticulture in the Balaton region in the 19. century.

The permament exhibitions of the museum show the geological development of Lake Balaton, its flora and fauna, history of fishing and shipping, bathing life at the lake and the history of the region. You can also see material remains from excavations on display. In the rooms of the museum yearly 4-5 temporary exhibitions of fine arts can be visited.

In the largest doll museum of Europe nearly 500 porcelain dolls are wearing different national costumes of the past and also clothing from the industrial era of Hungary.

Permanent confectioner's exhibition close to the Festetics palace, behind an appealing confectionery with family atmosphere. In 20 glass cabinets some 100 marzipan works are exhibited, which are mainly the creations of the owners Jenő Simonfai and his wife Ágnes. Probably the most renowned of them is the one, called the Festetics palace.

The lake with its appr. 47.000 m2 water surface is the largest natural thermal lake of Europe. It owes its worldwide reputation to the suphurous medicinal water, which has unique powers in curing various locomotor diseases like rheumatism. Water temperatures reach 33-35°C in summer and never drop below 22°C in winter, so visitors can bath in the lake the whole year long. The water lilies floating on the water provide an unforgettable view.

At the western boundary of Balatongyörök, alongside the main road 71 you find the site called Szépkilátó. As the name shows (appr. Beautiful View) visitors are pampered with a magnificent panorama of Lake Balaton, which is often used in advertising materials: to be seen are the Bay of Szigliget, Szigliget itself, the Badacsony and further remnant hills of volcanic origin. The lookout tower on Paphegy, close to Szépkilátó, can provide an even more spectacular view. 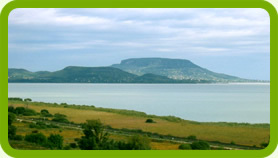 At the bottom of Szépkilátó there is a spring called Roman Well. Nearby remnants of a Roman villa dating back to the 3. century were discovered, the bath of which was supplied from the Roman well.

The museum was established by the famous Africa hunter dr. Endre Nagy. He allocated the collection of his hunting trips in Africa and also his Tanzanian etnographic collection here, in the family mansion. Displayed are bone and wood carvings, trophies, animal skins, cultic objects of African tribes. Surrounding the building you find a little safari park with African animals: camel, buffalo, zebra.

In the south-western part of the Tapolca Basin, on top of a 230 m high volcanic hill one can see the ruins of a castle originally built in the 13. century. The caste, which was enlarged several times, functioned as a border fortress and protected the line of the Balaton during the Turkish wars. From its bastions one can enjoy a splendid panorama of the Balaton and the surrounding mountains.

Further places of interest in the surroundings »